Éamonn Cagney is Ireland’s foremost hand-drum percussionist. His masterful percussion-playing and original compositions are displayed on his solo albums Convergence and Enchantment, his longstanding duo with Congolese guitarist Niwel Tsumbu, and his numerous collaborations, masterclasses and recordings. He is considered one of the best drumming teachers in Ireland, particularly in primary schools, where he has over 20 years of experience. One of Ireland’s most cherished musicians, Cagney has regularly worked with diverse musicians and organisations, including Liam Ó Maonlaí, Roger Doyle, the Abbey Theatre, the Hypnotic Brass Ensemble, Denise Chaila, Iarla Ó Lionáird, Lisa O’Neill, John Spillane, Martin Tourish (Altan), Julie Feeney, Mel Mercier, Music Generation, Irish World Academy of Music and Dance, Míchéal Ó Súilleabháin and Louis César Ewande. 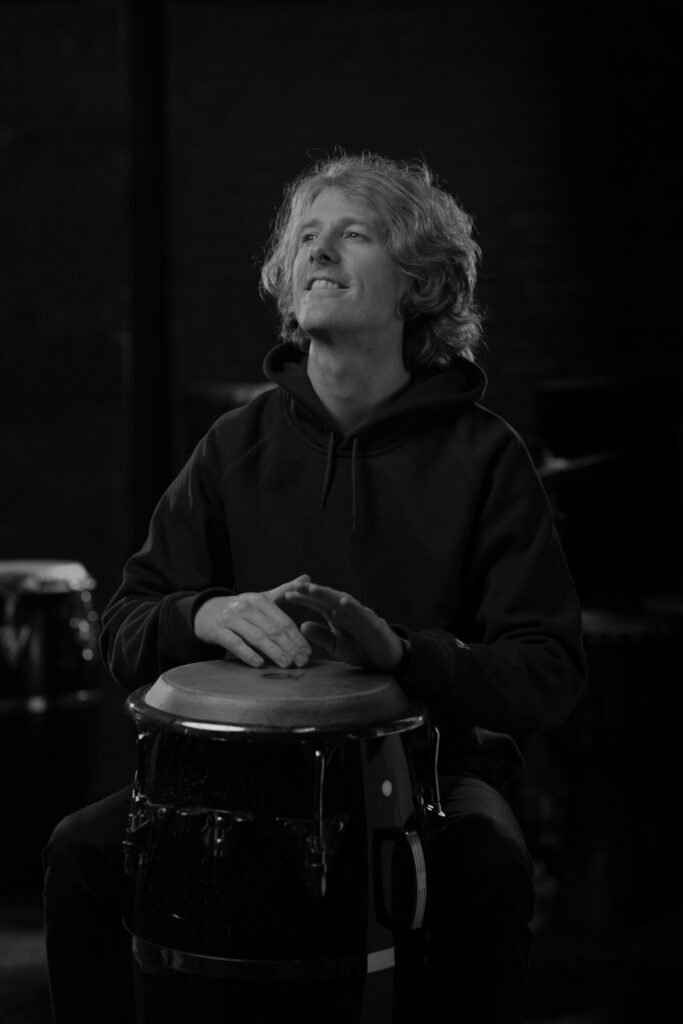 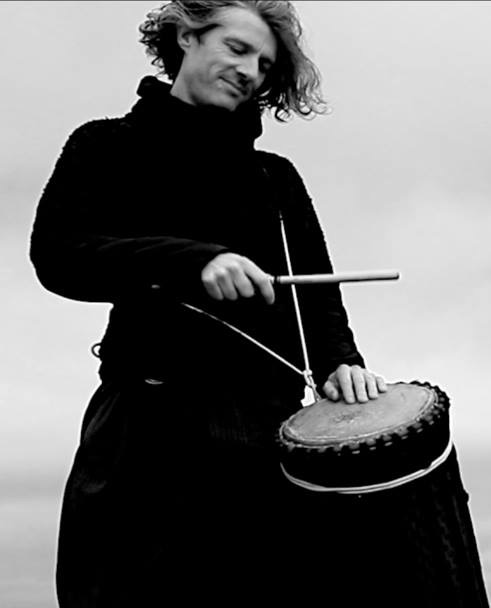 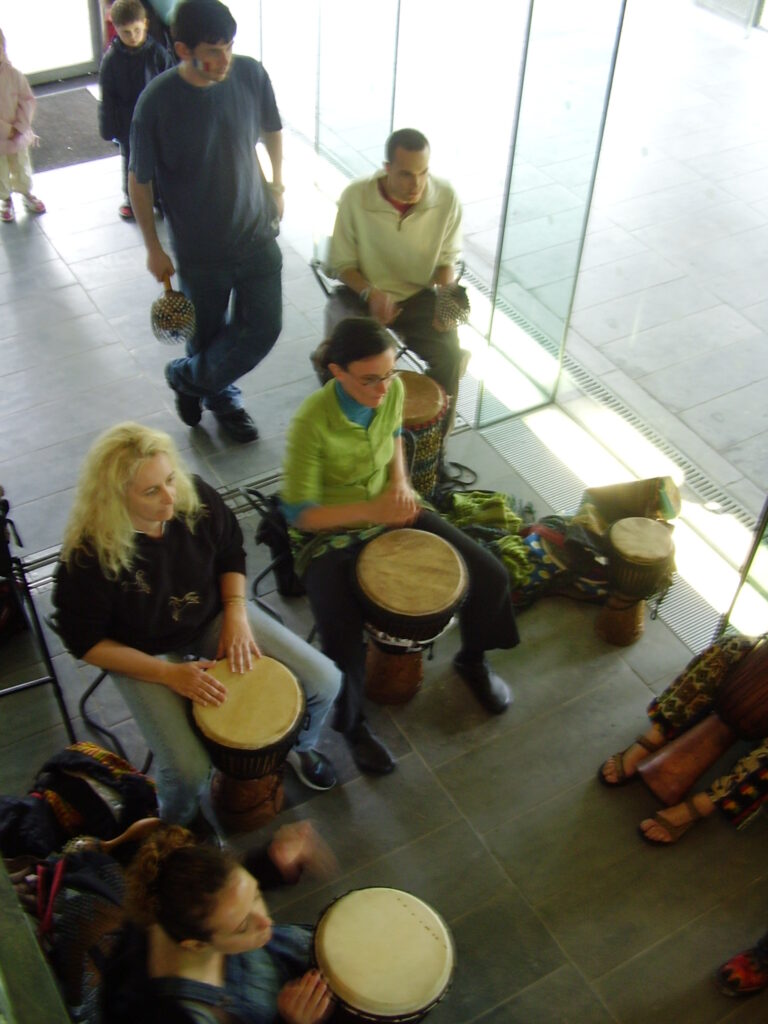 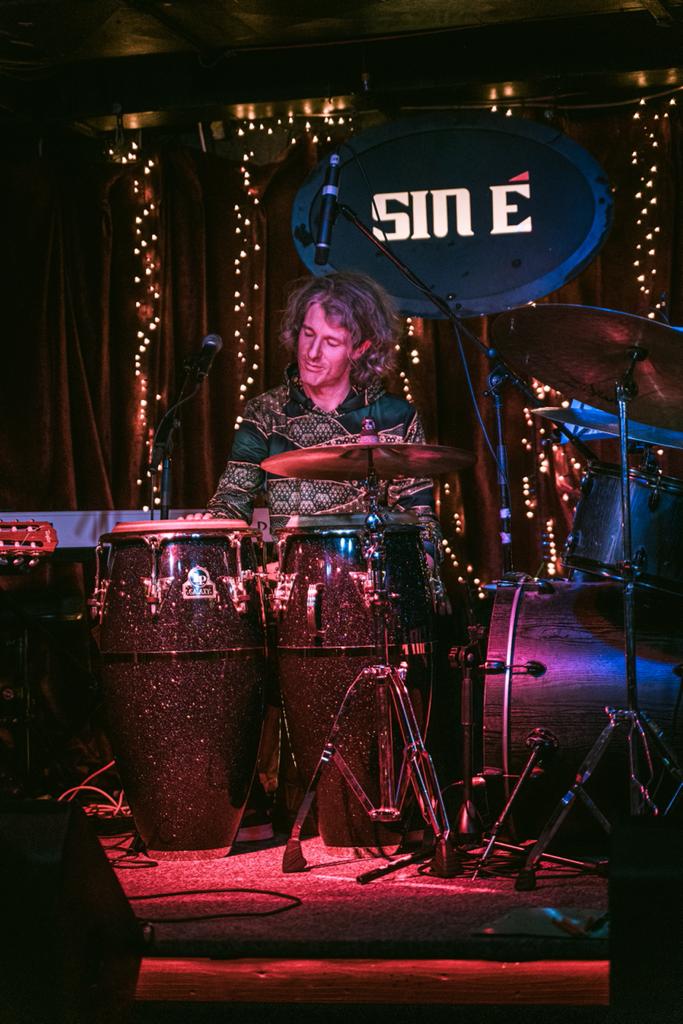 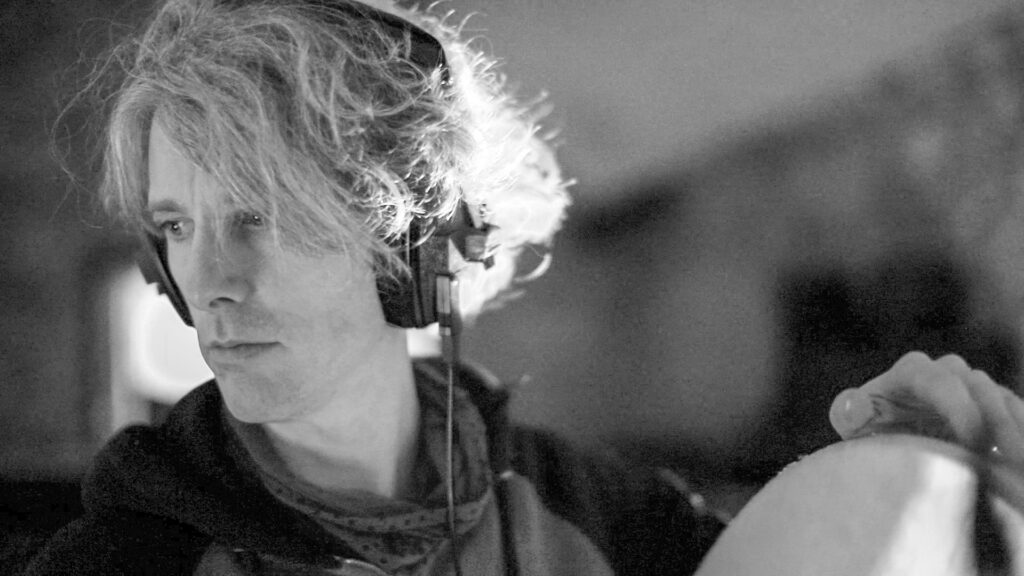 Éamonn Cagney grew up by the Atlantic Ocean in northwest Donegal, learning piano and guitar. Subsequently, he trained as a percussionist in Africa, Australia, the UK and Ireland, playing djembe, donga, cajon, udu, handpan and a huge range of percussion instruments.

Cagney’s virtuosic hand-drumming talent has made him one of Ireland’s most in-demand musicians. Throughout his solo music, his percussion ensemble RITHIM, his regular duo with Congolese guitarist Niwel Tsumbu, and his performances with the likes of the Hypnotic Brass Ensemble, the Abbey Theatre and Denise Chaila, Cagney mixes technical virtuosity and soulfulness across a range of musical styles.

At the core of Cagney’s music is the fusion of lyrical immediacy and groove-based rhythms. This is evidenced on the track ‘Holy Island’ from his debut album Convergence. Evoking the Donegal seascape, and faintly recalling Ry Cooder, an electric guitar traces a spare minor-key melody over a syncopated djembe rhythm. Gradually, strumming acoustic guitar enters and the music breaks into a beautiful undulating violin and electric guitar duo. The multiple meanings of the titular convergence flash up: ancient and new, Gaelic and global, acoustic and electric, lyrical and pulsating.

In 2022, Cagney was spotlighted on Irish national television on TG4’s Cumasc: Seisiúin sa Black Gate. The programme showed him in collaboration with Liam Ó’Maonlaí and Niwel Tsumbu as they improvised and performed their respective compositions.  ‘It’s like a few old friends getting together and telling stories’ – Cagney explained at the start of the programme, signalling the spirit of warmth and openness at the core of his musical activity.

A folklorist by training, Cagney has developed an innovative hybrid of storytelling and music. This is shown in 2020’s Young Conall of Howth, a concert-length piece composed while Cagney was musician in residence with the Dun Laoghaire-Rathdown Arts office in South Dublin. The original story ‘Eachtra Chonaill Ghulbain’ (‘Conall Gulban’s Otherworld Adventure’) is based on the historical personage Conall Gulban, chieftain of Tír Chonaill (Donegal) and member of the 5th Century Ui Néill dynasty.

Through dramatic and striking music, Cagney tells the tale of the titular hero, who, on a quest to the northwest of Ireland to rescue his beloved, ends up giving his name to the land. With over 80 versions of this story in the National Folklore Collection at UCD, it was traditionally a popular folktale. Cagney dramatises episodes like Conall’s battle with the giant-like Macaomh Mór to reclaim his beloved Eithne, refashioning this piece of Irish heritage for twenty-first century audiences.

Collaboration is at the heart of Cagney’s music. Of his longstanding duo with Niwel Tsumbu, the Irish Times commented: ‘This duo had a cataclysm of moods and moves to share, unveiling a cavernous stash of redemptive music, and promise of much more to come,’ calling Cagney’s intricate percussion talent ‘calculus-like’. The list of Cagney’s collaborators is wide-ranging, including Liam Ó Maonlaí, Roger Doyle, the Abbey Theatre, the Hypnotic Brass Ensemble, John Spillane, Martin Tourish (Altan), Míchéal Ó Súilleabháin, Denise Chaila, Iarla Ó Lionáird, Lisa O’Neill and Louis César Ewande—stellar musicians all.

Cagney’s collaborative spirit is displayed on the title track of his second album Enchantment, a collaboration with Niwel Tsumbu (nylon string guitar) and Martin Tourish (button accordion). Opening with martial-sounding block chords on the nylon-string guitar, the tune soon shifts into a weaving traditional Irish jig whose melody is doubled on guitar and accordion over congas, djembe and shaker. Here is a spine-tingling effect: a genuinely twenty-first Irish music dancing across genres and styles, carrying national artistic heritage into a global future.

Alongside his work as a performer and composer, Cagney is much in demand as a hand-percussion teacher. He regularly teaches at the World Music Academy at UL, has taught workshops at other universities like UCD and UCC, and he also runs school workshops all around Ireland, particularly in primary schools, with over 20 years of experience. All of which underlines Cagney’s status as one of Ireland’s most cherished musicians. 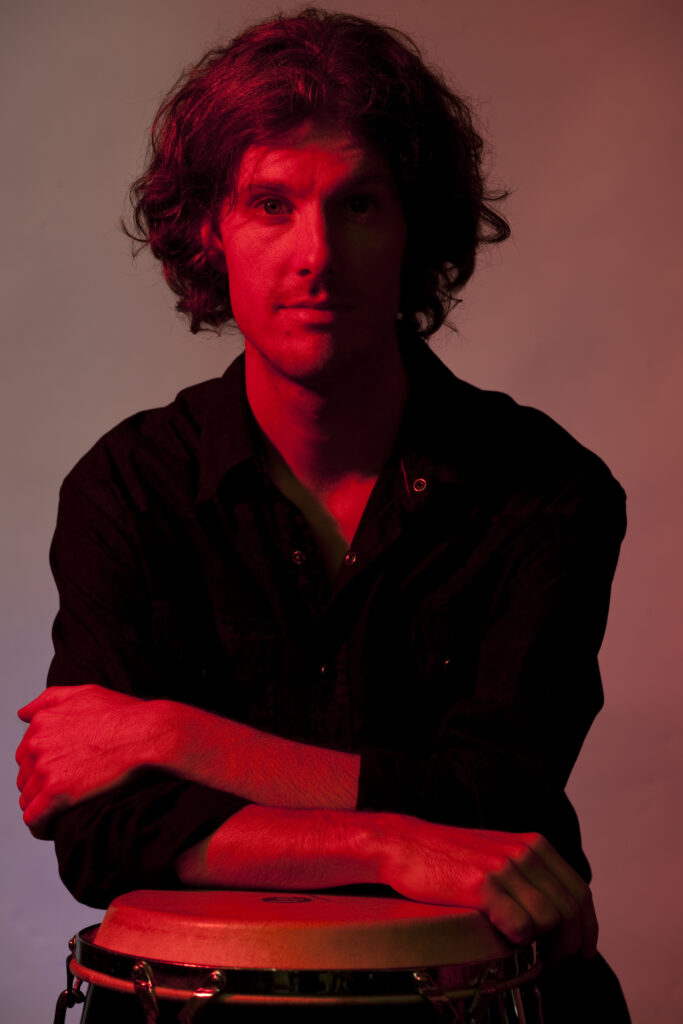 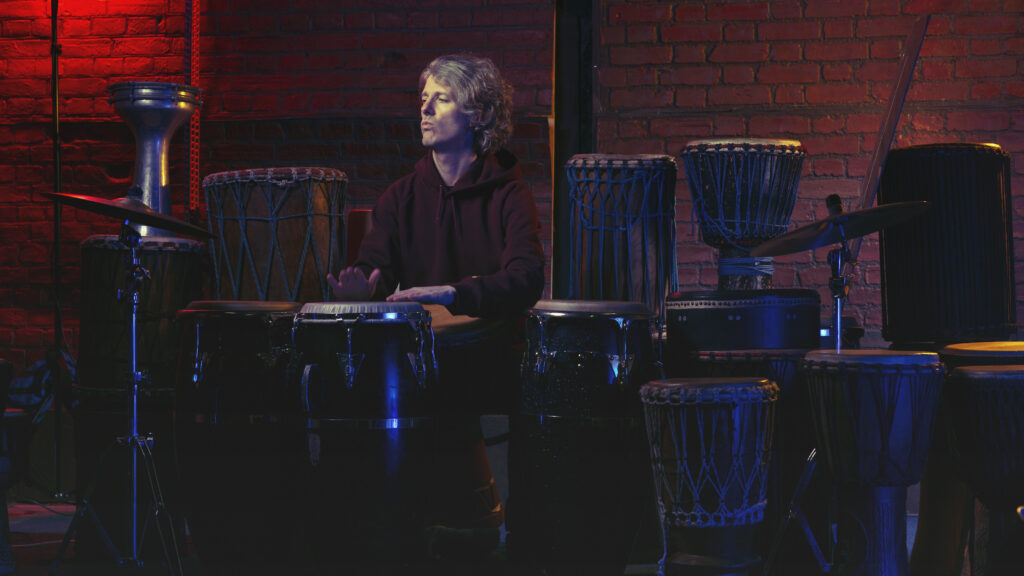 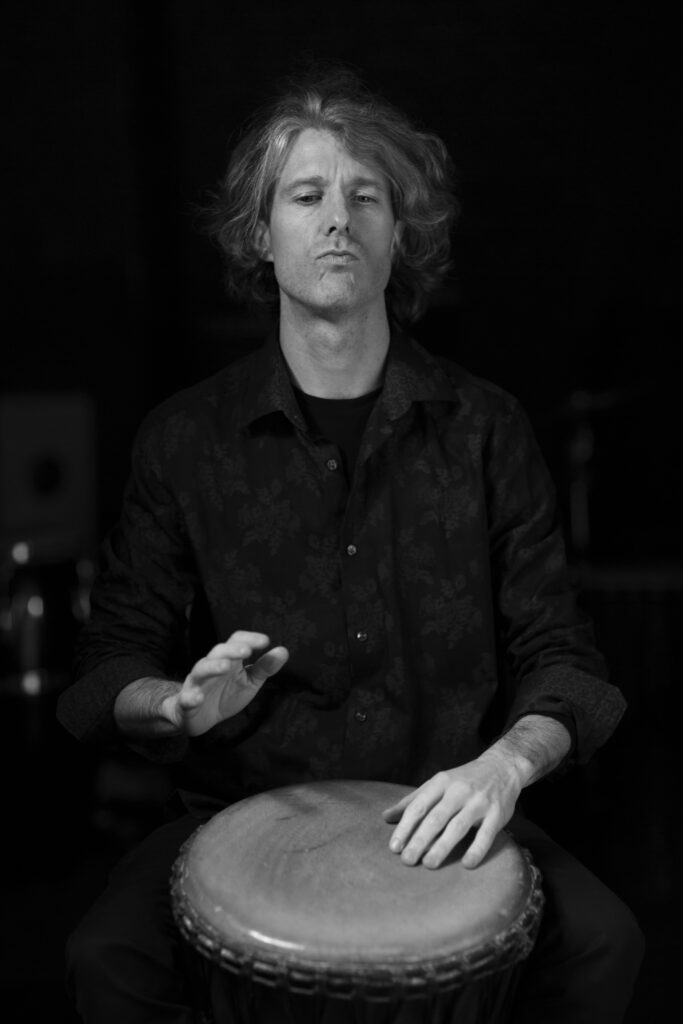 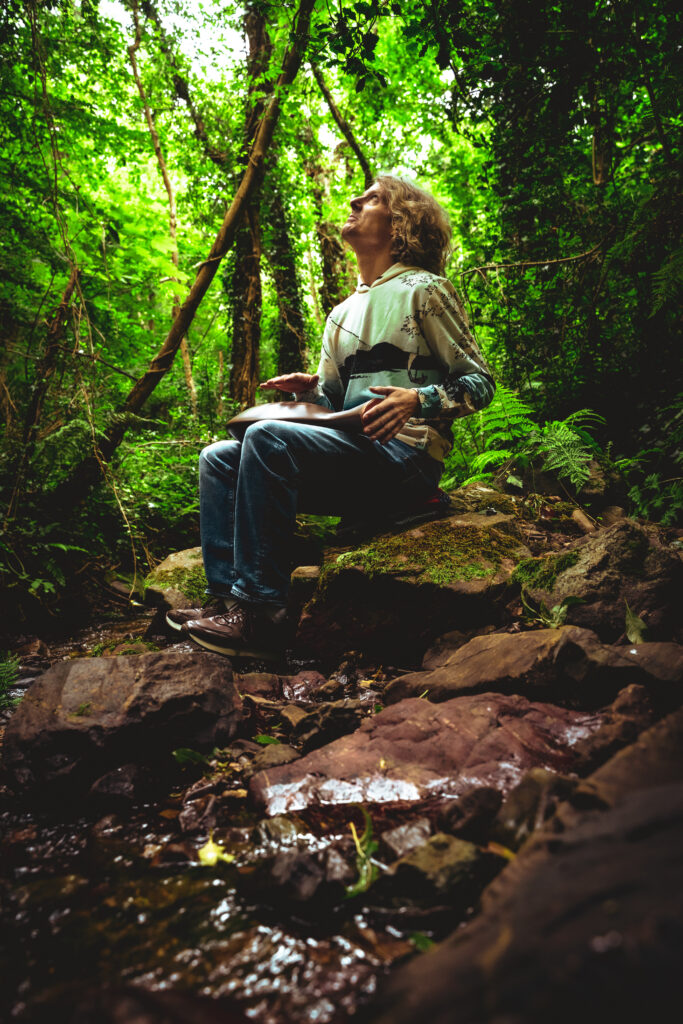